Cataract surgery is the most commonly performed procedure in the United States with an estimated 2.79 million cataract extractions in 2005 (ASCRS 2006).

The lens is a biconcave disk found just behind the iris and in front of the vitreous body. The lens is circumferentially suspended inside the eye by cords called zonules to the ciliary body.

The ciliary body is a circular muscle that lines the inside of the eye and tenses or relaxes the zonules to change the shape and thickness of the lens.

This controlled transformation of the lens alters the angle of the light entering the front of the eye, which allows us to focus images nearby or in the distance onto our retinas—an action referred to as accommodation.

The lens has three major parts, all transparent and all circumferentially layered. A popular way to conceptualize the lens involves imagining it as a clear peanut M&M. We will start from the inside out.

The different types of cataracts are generally described by their position within the lens, as noted below. 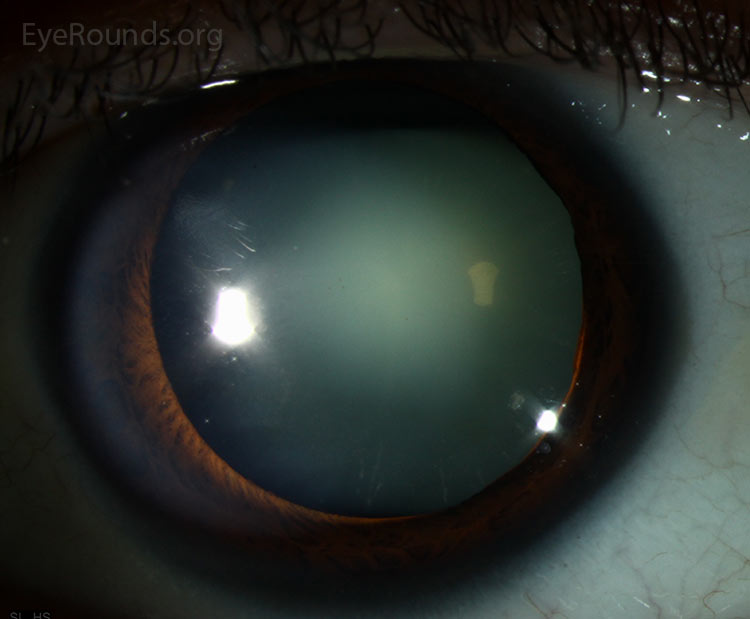 the innermost, oldest layer of the lens. Nuclear cataracts are the most common cataracts. The patient may notice progressive loss of vision and decreased perception of certain colors, particularly blues. Although mostly age-related, studies have linked these types of cataracts to smoking, diet, and gender 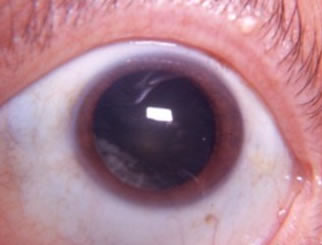 cortical the outermost, youngest layer of the lens. Cortical cataracts are four-fold more common in African Americans and linked to diabetes mellitus, trauma, smoking, and excessive sunlight exposure (Solomon and Donnenfeld 2003). Patients can have vision loss, halos and glare that are especially noticeable while driving at night. This cataract has a wedge shaped or “cortical spoke” appearance that commonly appears inferiorly and nasally 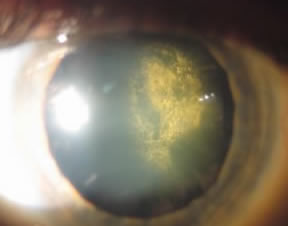 just under the candy shell. Posterior subcapsular cataracts are associated with diabetes mellitus, radiation, smoking and long term corticosteroid use (Solomon and Donnenfeld 2003). The symptoms associated with this cataract (glare, halos, image blur, and distortion) are usually more rapidly progressive compared to other types of cataracts and are therefore usually more noticeable to the patient.

Ophthalmoscope: Think of looking through a dirty window when using a direct ophthalmoscope to examine a patient with a cataract. If a patient has told you his or her vision was blurred or yellowed when looking out, and those symptoms are caused by a cataract, you will probably have the same experience looking in. A cataract will dull the red reflex but should not cause a relative afferent pupillary defect. Dulling of the red reflex in this situation is caused by light scatter, not blockage of light. So the same amount of light is getting to the retina, but it is not focused on the fovea, so this eye should not have a relative afferent pupillary defect if the cataract is the only reason for the visual decline.

Slit Lamp: If you adjust the angle of lighting for optimal viewing, the slit lamp will always give the best view of any abnormality in the lens.

As mentioned in the examination section, cataracts cause visualization challenges for both the patient and the ophthalmologist. For this reason, cataract surgery may be indicated in 2 general situations: trouble seeing out or trouble seeing in.

If you are going to rotate through ophthalmology, you will likely see a cataract surgery. While the ability to spot a cataract will get your observation checklist marked, being able to speak knowledgeably will be noticed. Below is a list of the steps involved.

1. Creation of a paracentesis using a blade while stabilizing the eye with a fixation ring

2. Instillation of topical lidocaine into the anterior chamber of the eye

3. Placement of an ophthalmic viscoelastic device (OVD) in the anterior chamber. This “gel” is thicker than the aqueous of the anterior chamber it is replacing. It serves two purposes. One is to maintain the shape of the anterior portion of the eye allowing the surgeon room to maneuver. The other is to protect the inside of the cornea from the ultrasound energy emitted by phacoemulsification. The gel coats the tender inner surface of corneal endothelial cells protecting them from ultrasound energy.

5. Capsulorhexis. A hole is created in the capsule so that the surgeon can access and remove the nucleus and cortex of the lens.  If you recall the previous M&M® analogy, this could be described as “peeling off the front of the candy shell to remove the chocolate and nut inside”. The purpose of this step is to create access for removal of the lens fibers while still maintaining the integrity of the rest of the capsule, so it can hold the prosthetic lens. Here you will see the ophthalmologist perform a continuous curvilinear capsulorhexis (CCC) by creating a tag of capsule and then carefully maneuvering it to peel away a circular opening to the lens fibers. This is a technically challenging aspect of cataract surgery that takes years to master. Another technique is called “The Can Opener” technique. As you can imagine, it is not nearly as elegant, but can still be necessary in some cases.

6. Hydrodissection. The cortex of the lens is attached to the capsule. The capsule needs to remain so it can be used to hold the IOL. To separate the two, a balanced salt solution is injected between these two layers to cleave them away from one another. After this procedure, the lens should be freely mobile within the lens capsule. You will see the surgeon rotate the lens like a record on a turntable toward the end of this technique to ensure that the lens is mobile.

7. Phacoemulsification. This tool uses ultrasound energy to break down or emulsify the nucleus of the lens. A vacuum is attached to the ultrasound probe in order to suck away freed pieces as they are disassembled. Techniques with names such as the “Stop n’ Chop” and “Divide and Conquer” are used to safely fragment the nucleus into manageable pieces for emulsification and removal.

8. Cortical Aspiration. Aspiration is used to grab the cortex and peel it away from the inside of the capsule. This is the most likely time to cause a tear in the capsule, which can allow the vitreous entry into the anterior chamber (a bad thing). Referring back to our analogy, the chocolate is removed in this step leaving an empty shell (the capsule) to be filled later with the intraocular lens (IOL).

9. Filling the bag with OVD. Just as before in the anterior chamber, the OVD is used to maintain the structure of an evacuated space allowing for increased maneuverability and safety.

11. Removal of OVD from the capsular bag and anterior chamber.

12. Hydration of the corneal incision to “close” the wound. Water causes the cells of the cornea to expand and press against one another, sealing the wound shut without sutures.